One of the most popular tiling window managers out there, i3 is written from scratch. The developers claim that it is targeted towards advanced users, but it is certainly easy to use and configure. More so than its suckless alternative. Primarily due to its beautiful and well maintained documentation (some of the best docs I have ever seen for window managers), as well as an advanced user community who regularly chip in to make sure things keep running smooth.

I3 is written from scratch

Check out the I3 guidelines on their official website

One thing to note is the following statement clearly mentioned on their official website:

The usual elitism amongst minimal window managers: Don’t be bloated, don’t be fancy (simple borders are the most decoration we want to have). However, we do not enforce unnecessary limits such as a maximum amount of source lines of code. If it needs to be a bit bigger, it will be.

Now I don’t know about you guys but I think this is targeted at dwm for enforcing a 2000 SLOC limit on their development. But it is for you guys to decide :)

I3 is available for the following distributions. In addition, you can download the debian release, or just the tarball as well.

The first time you run i3, since you will not have a configuration template at ~/.config/i3/config , i3 will run the i3-config-wizard. Which will prompt you to generate a configuration automatically: 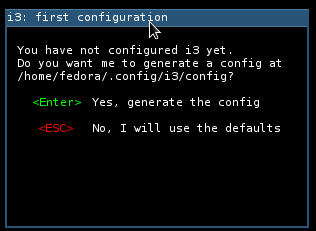 Once you do that, you will be greeted by your wallpaper, with a thin status bat at the bottom. Yes, i3 status bar is at the bottom by default. But this can of course easily be configured. 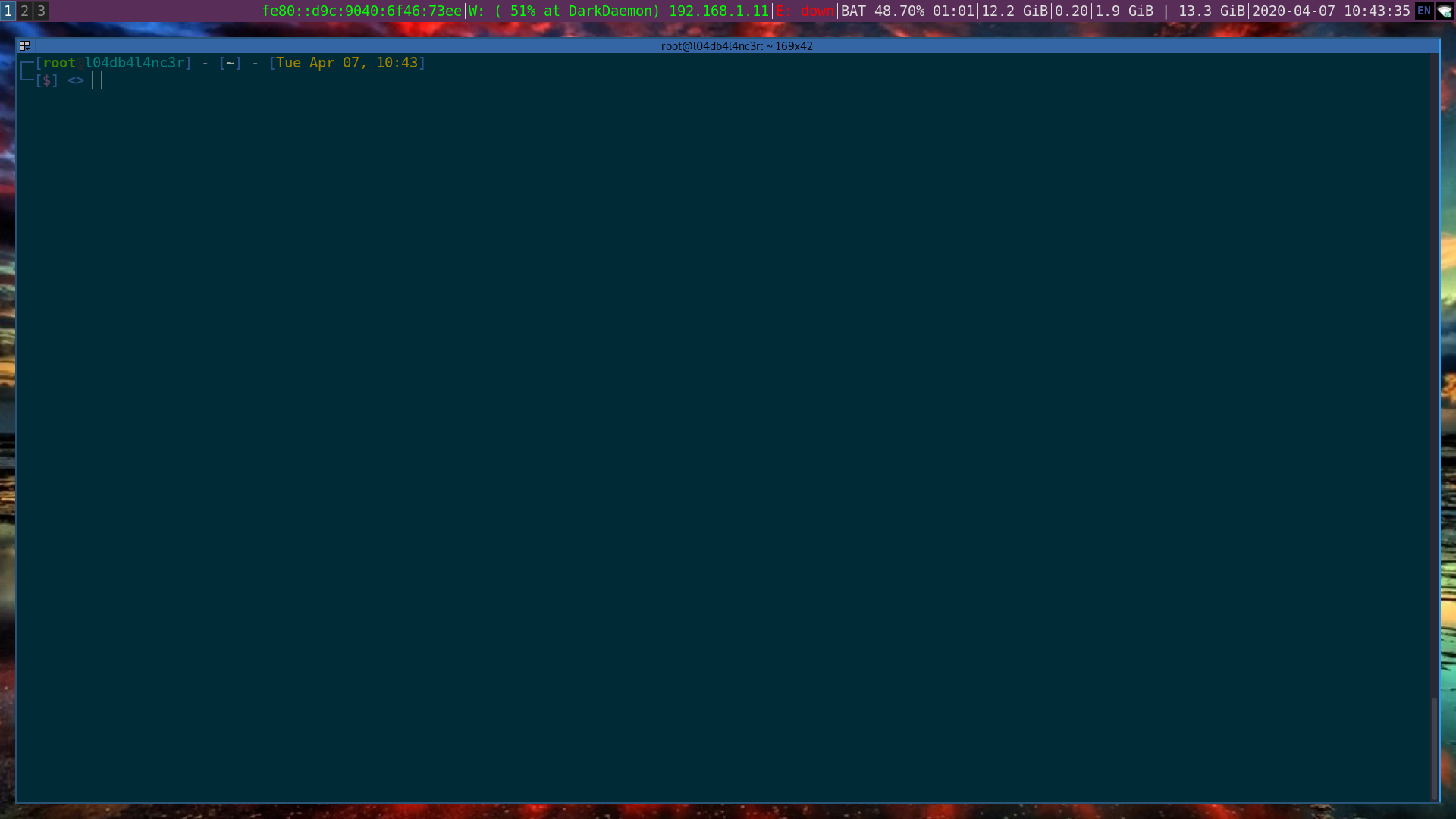 In i3, the status bar shows the number of active workspaces. I3 gives you 10 workspaces that we can switch between. To do so, simply hit <Alt> + [1-9] for the first 9 and additionally <Alt> + 0 for the 10th workspace. For example <Alt> + 6 will take you to the 6th workspace. Note that whatever was running on the previous workspace keeps on running there as usual.

i3 uses vim bindings for movement. The only difference is that instead of using h|j|k|l for movement, it shifts the bindings one key to the right and instead uses j|k|l|; .

As mentioned earlier, i3 uses the tree data structure for storing window references in workspaces. Traversing through these windows is just like tree traversal. Now you have different modes of operation, and each mode tweaks the layout, but all in all it is just a tree data structure underneath. For example, in the given window split pane, the tree will look like the following: 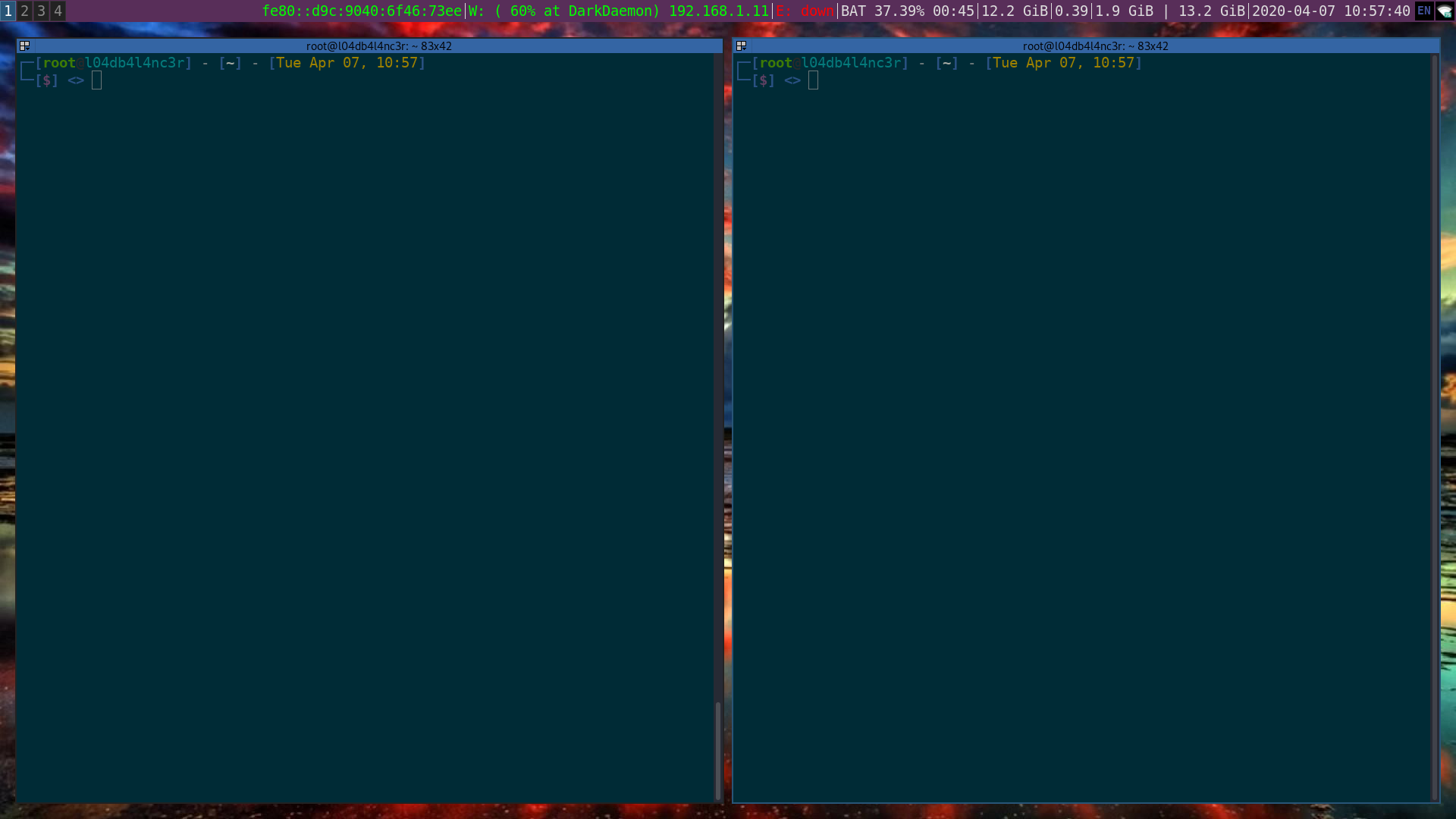 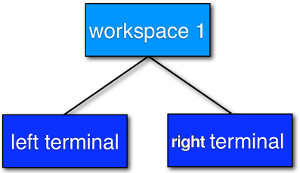 This mode is used for spawning windows which are vertically split. To activate this mode, simple press <Alt> + v . After this mode being activated, when you spawn programs next, either using shortcuts or dmenu, they will be vertically split. 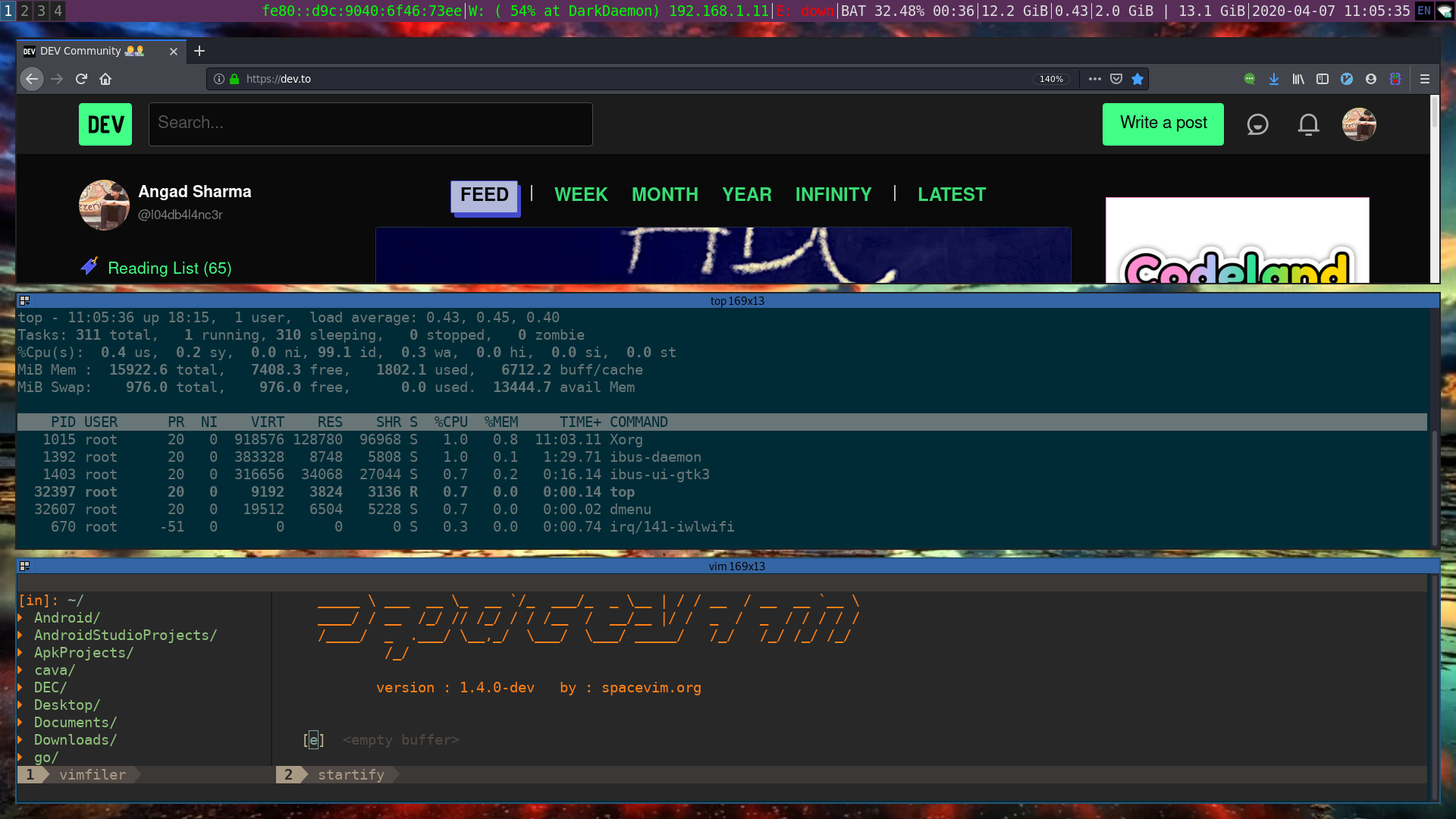 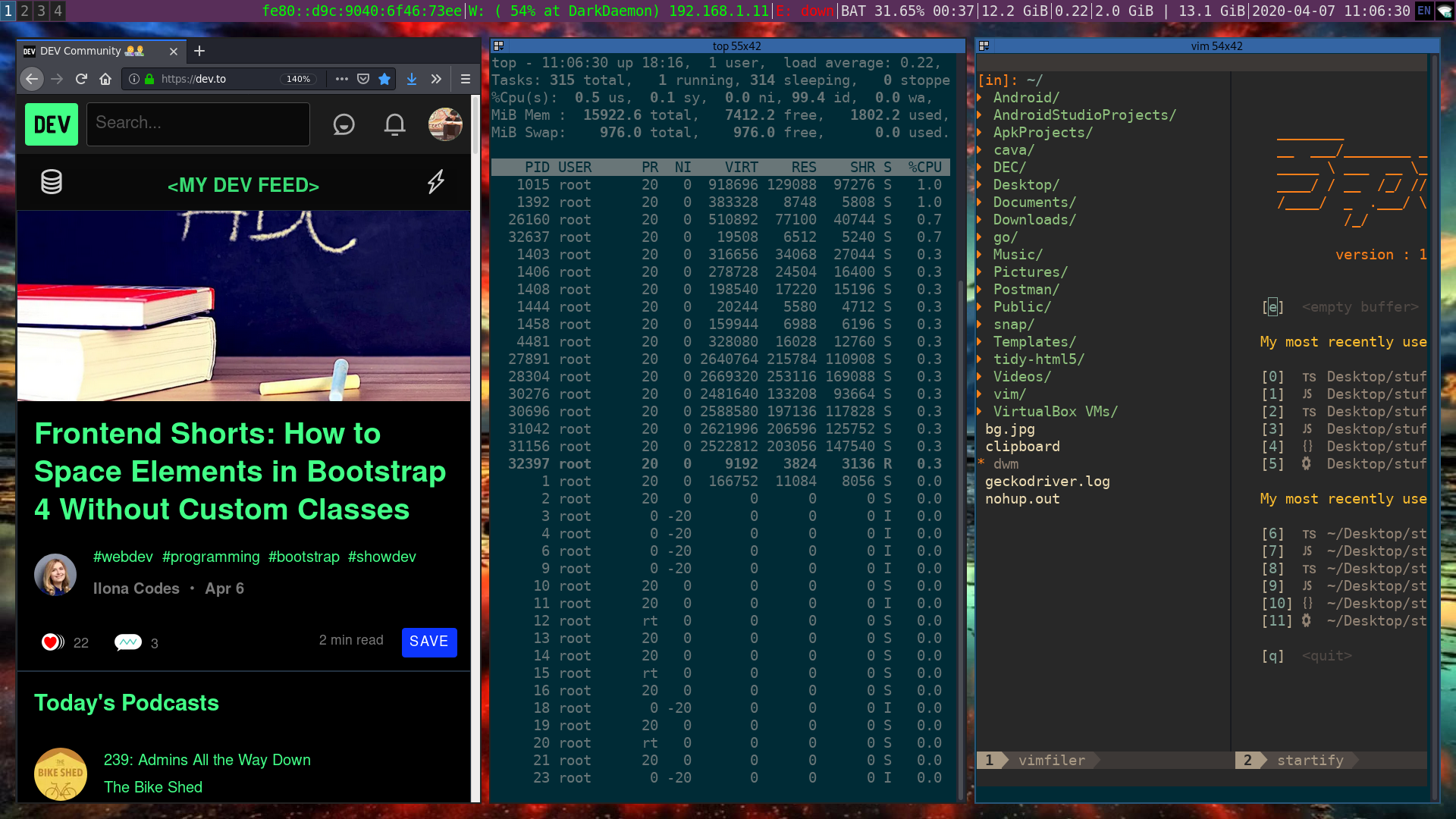 Stack mode will place each and every tab on top of each other like a stack. Note that it is not actually a stack internally, but only visually so. To activate stack mode press <Alt> + s . 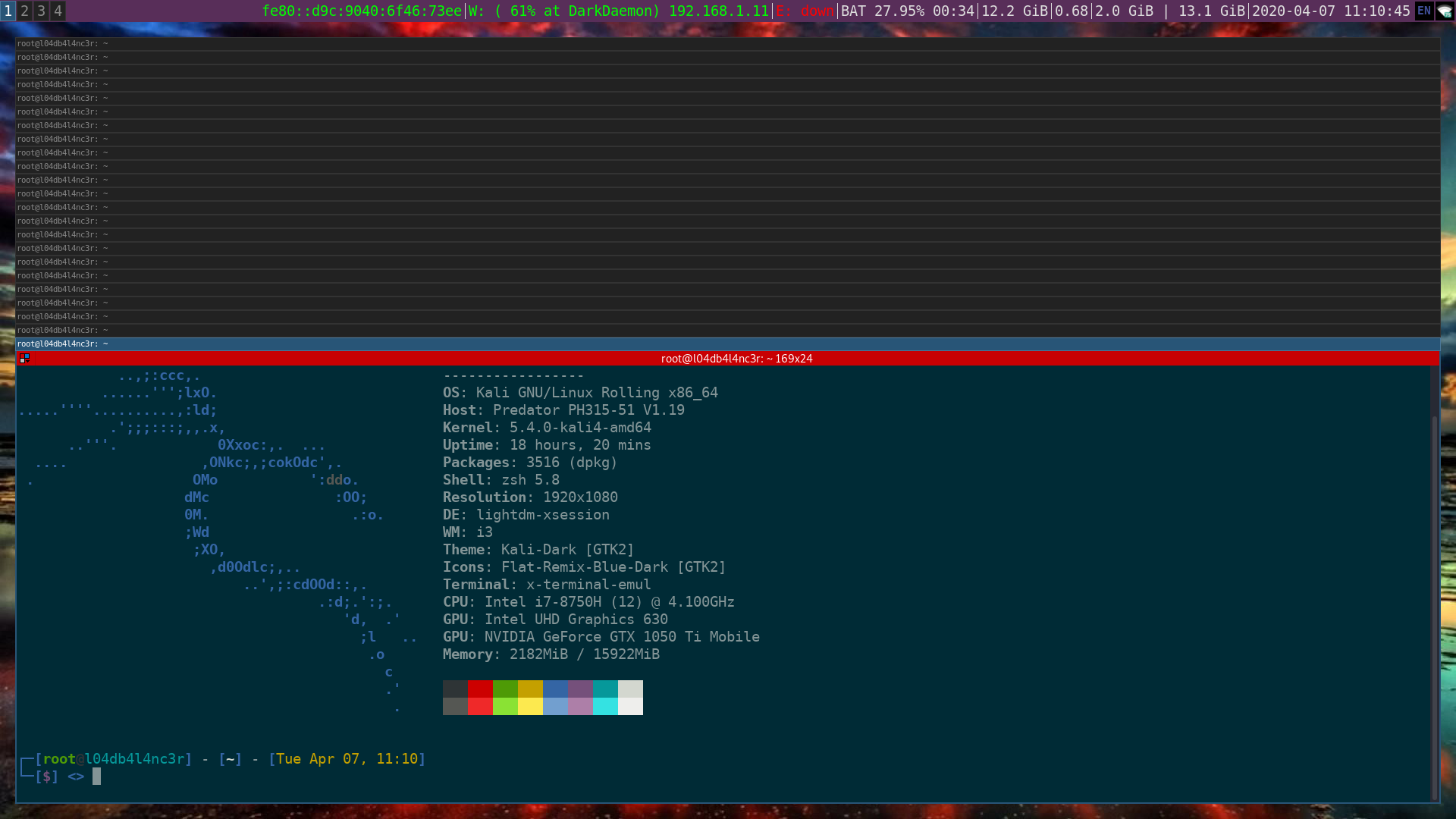 Tabbed mode is exactly like the stack mode, the only difference being that it visually places the windows as tabs (the kind you might see on a browser). To activate it, press <Alt> + w . 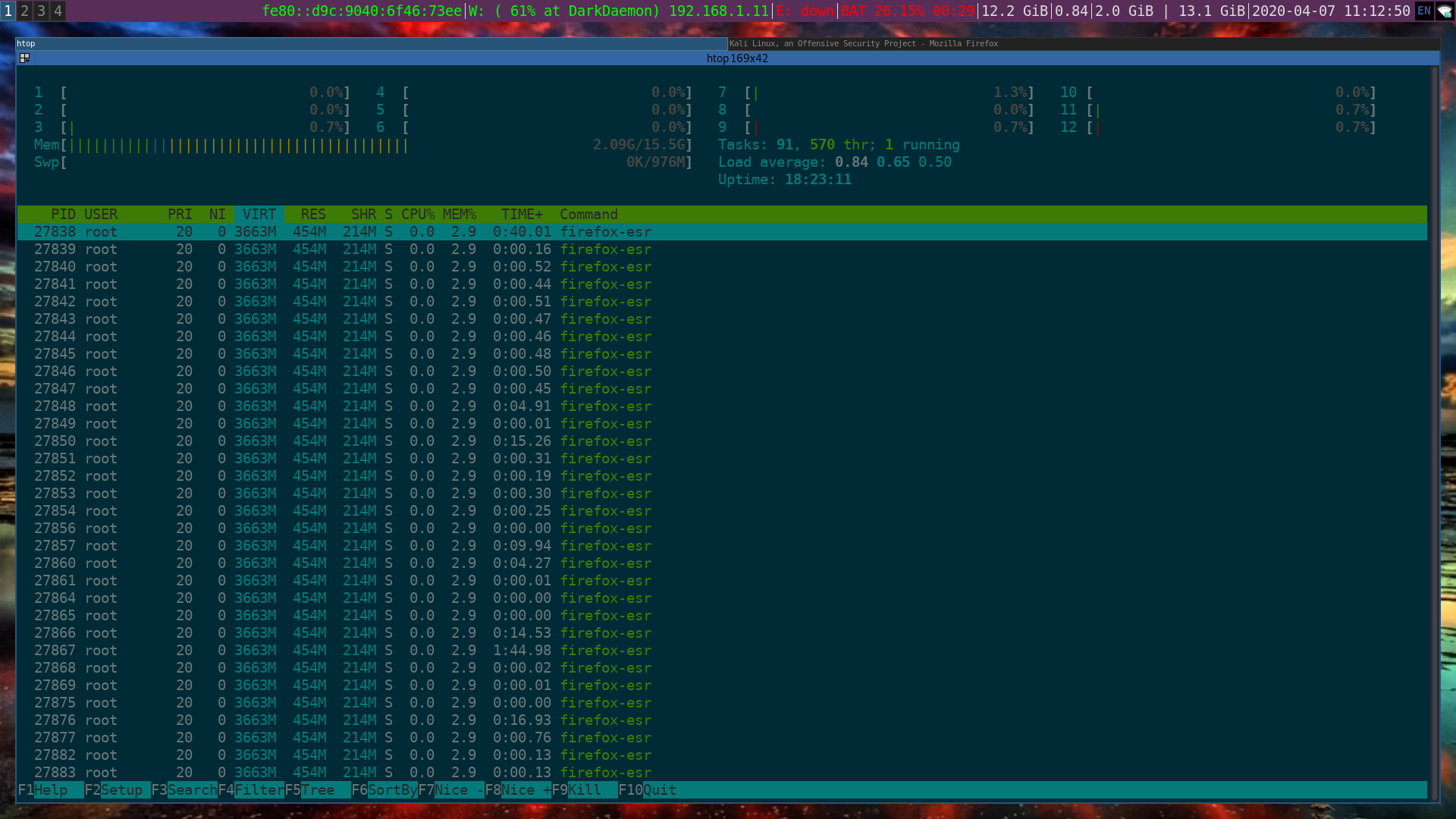 The i3 configuration lies in ~/.config/i3/config file. It uses an easy to use syntax for defining parameters. All of which are well documented on i3’s official user manual. In this blog, we will be configuring our status bar as well as changing some key bindings to get started. In the next section we will learn how to add gaps between windows in i3.

See the full configuration tutorial for i3 here.

In i3 configuration, keybindings are defined by the bindsym keyword, and the modifier ( <Alt> by default) is defined by $mod .

Now I am a long time vim user, so I am used to the vim’s usual movement keys (h|j|k|l). In i3 everything is shifted to the left. Now let us try to change that. Find the following lines in the configuration:

And change it to use h|j|k|l instead of j|k|l|;. For the configuration to take effect, save the file and hit <Alt> + <Shift> +r for live reload. You will now see the following prompt on top:

Whoa whoa! This wasn’t supposed to happen right? I3 throws an error in the form of a red status line whenever there is an error in the configuration. So you will always get to know where you went wrong. How convenient is that! Just a quick show at the error log will make you realize that you cannot bind <Alt> + h for moving left since it is already bound (for splith mode). To get rid of this error, just change the binding for splith mode like the following, and you should be good to go! Hit <Alt> + <Shift> + r after making the change, and voila.

The bar at the bottom of your screen is called the status bar, or simply i3bar. It supports very low as well as high level customization, including:

A full set of supported variables and customization can be viewed here.

The following is my configuration, which I have added at the bottom of my ~/.config/i3/config file:

After saving the configuration and refreshing i3, the bar looks like this:

I3-gaps is a fork of I3 which adds additional functionality such as configuring gaps between windows. The best part about i3-gaps is that it is always kept up to date with the upstream, so any new update in i3 will also be reflected in i3-gaps. Check out the official repository here:

Now i3 has PPAs for Ubuntu and AUR’s for Arch. If you want to build it from source, for other distributions, this gist will get you started on it.

Once you install it, you are good to go. Add the following lines (in the same config file) for configuring gaps between your windows:

Save and reload, and you are good to go. I3-gaps also has a smart gaps feature, where gaps can be turned on and off in a particular workspace in certain scenarios. I recommend checking out the official repository for the same.

I3 is free of bloat, and is very easy to learn. Even though it might be more complex than simpler alternatives like herbstluftwm, but learning it is easier due to the excellent documentation which makes for a fun exploration. I recommend everyone to try out i3.

The developers at i3 took a rather radical approach, building this wm from scratch, using a tree data structure. But the more I read up about i3, the more I see how well they have utilized this idea. I3 is not the best wm by far, but it is certainly one of the better ones.