Dwm stands for Dynamic Window Manager. It is a minimalist tiling window manager designed specifically for X11. It is designed to be much smaller, faster and simpler than its alternatives.

The Suckless community claims that dwm’s code is never intended to exceed 2000 SLOC (source lines of code). For those of you who are not familiar with the suckless philosophy, check out my blog on the same:

Dwm, like other suckless tools, is meant for the elitist, and suckless makes sure of that. There is no binary distribution of dwm. It is just a source file which you have to compile manually to get started. Customization requires editing the source directly and building it from scratch (which is easier than it looks, up ahead).

Execute the following commands to get started with dwm:

Now that you are all set, logout and log back in again. Once you do, you will see a blank screen with numbers on top. The screen is going to have your wallpaper on it by default. Something like this: 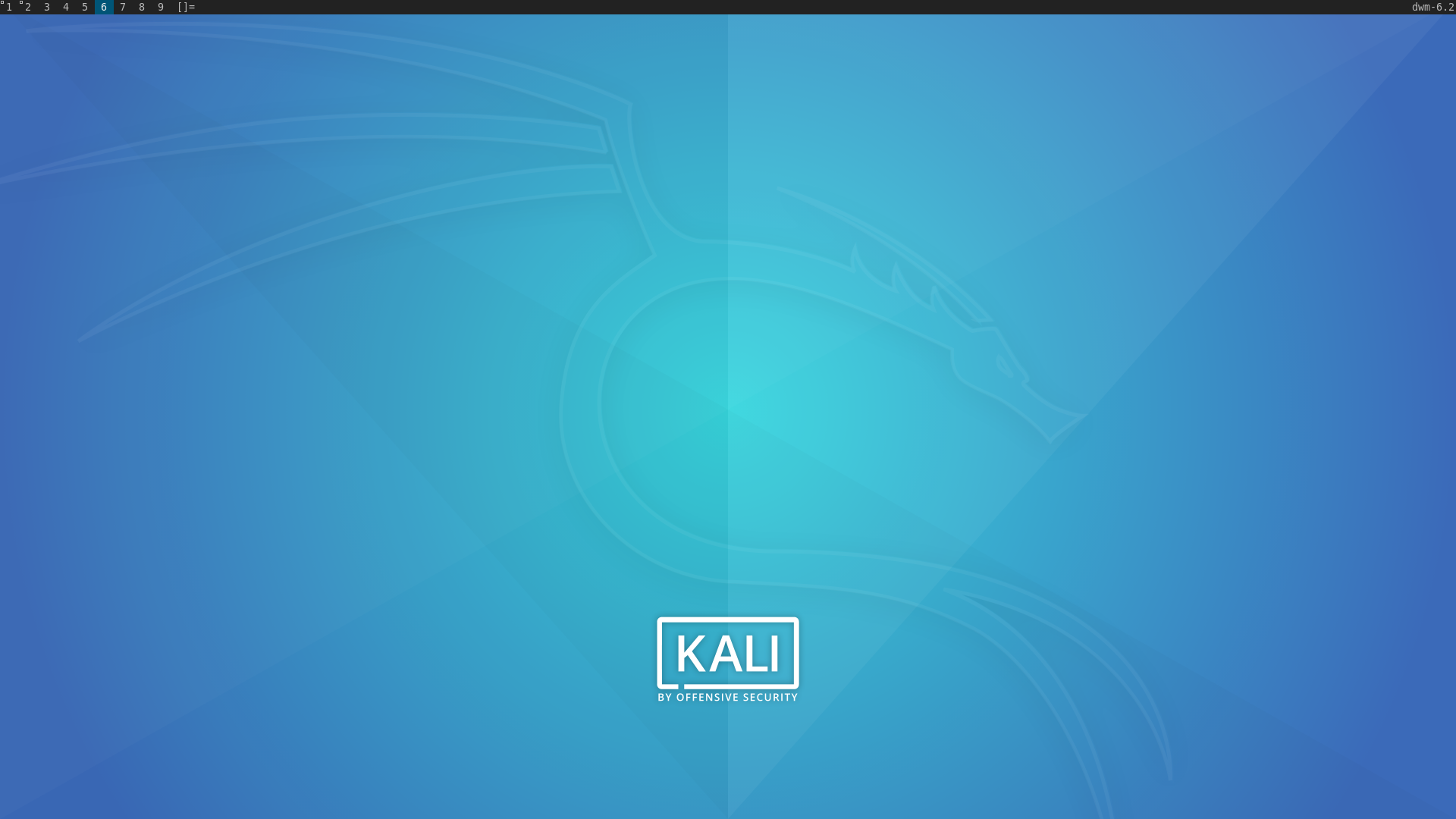 To spin up a terminal in dwm, just press the following: <Alt> + <shift> + <Enter> . If it doesn’t work then checkout the changing keybindings section where I talk about remapping the key bindings and customizing which terminal should open up.

If you keep on opening terminals up then you will notice that the focus shifts to the newest terminal in the stack. A stack is a LIFO (last in first out) data structure. Dwm makes sure that the most attention goes to the recently opened program. You can choose between a lot of different layouts from dwm patches. The one I like to use is centeredmaster, which keeps the master terminal in the center of the screen. 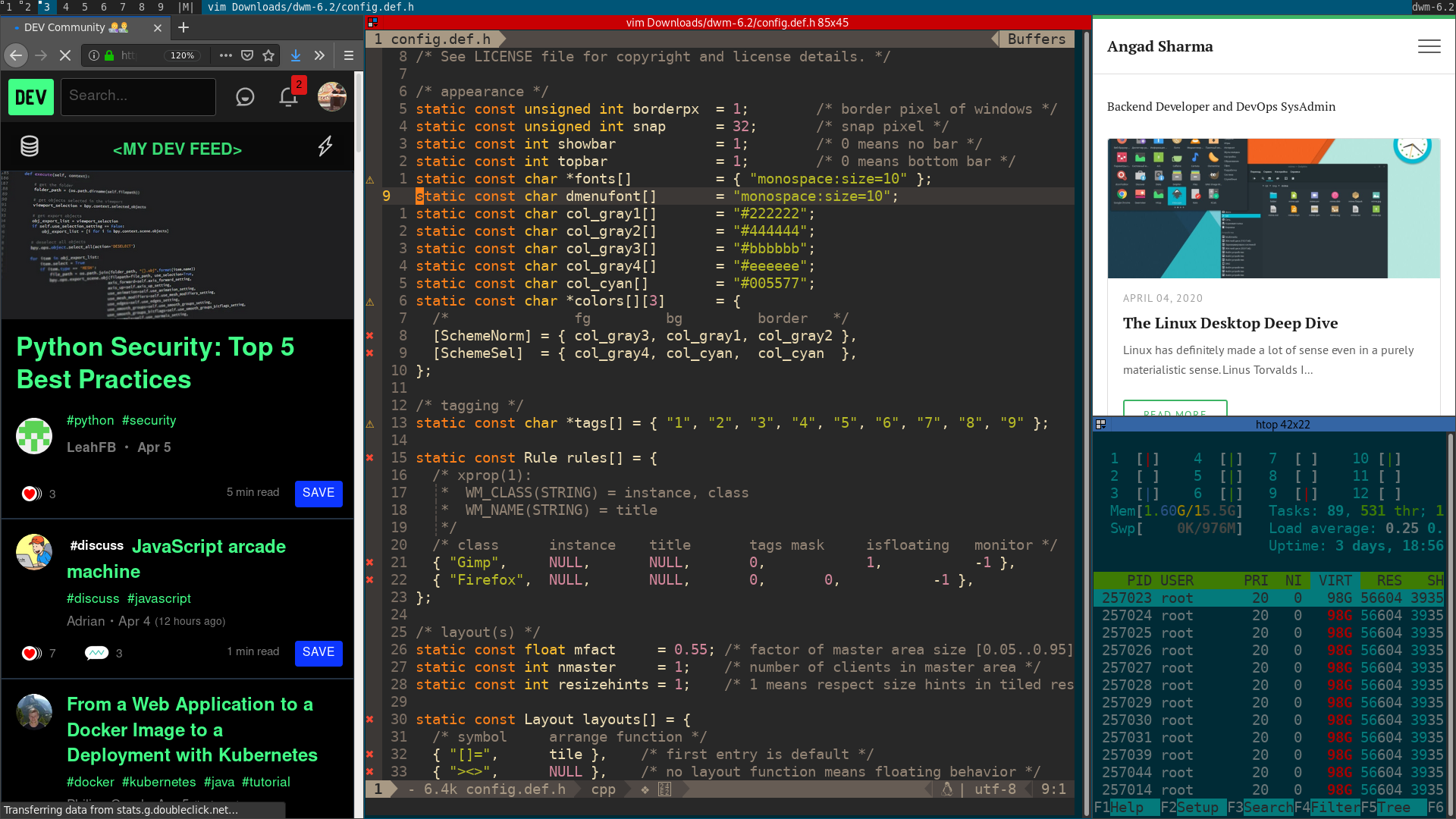 If you want more than one master then you can even promote and demote master panes. <Alt> + i is used to promote the master and <Alt> + d is used for demoting it. Here is as example of two windows selected as master: 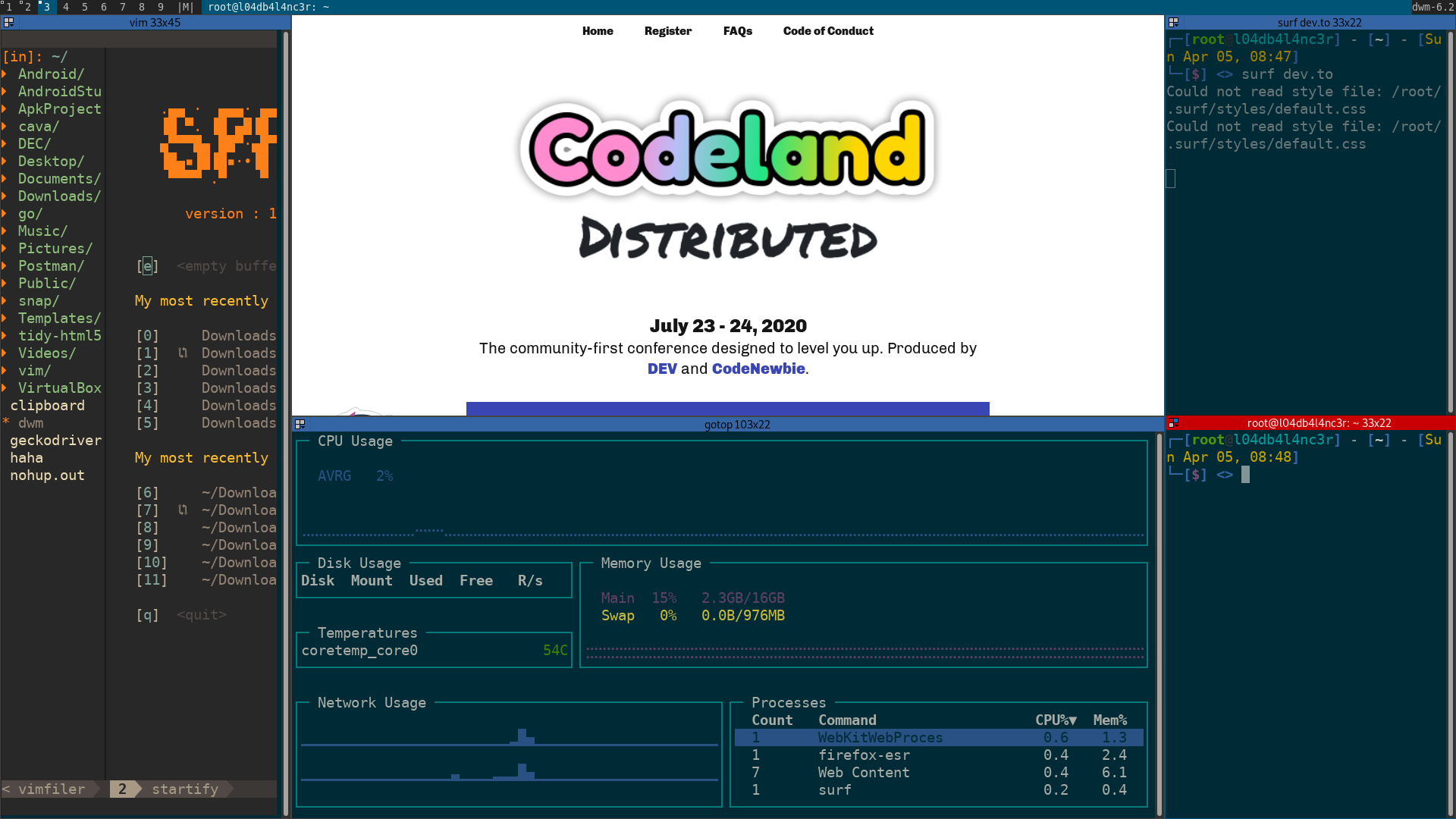 Notice that the top bar has a few numbers, starting from 1 to 9. These numbers are tags (workspaces) that we can switch between. To do so, simply hit <Alt> + [1-9] . For example <Alt> + 6 will take me to the 6th tag. Note that whatever was running on the previous tag keeps on running there as usual. The highlighted numbers indicate that there is something running on those tags.

To view all of the windows running in all of the tags at once, press <Alt> + 0 . Tags are a very powerful way to switch between programs and view multiple programs at once.

Dwm is feature rich when it comes to managing windows, and has a lot of solutions to complex problems such as fixing a tag on all screens, promoting windows to master and demoting them to slaves.

The default super (called a modifier in dwm, or Mod), <Alt> can be changed by editing the configuration.

Dmenu is a toolbar menu which can be used for easy access of programs. Simply press <Alt> + p to activate the menu, then type in the name of the program you want to execute.

Note that you do not have to have dwm to get dmenu. You can independently install it either by building it from source, or running the following command:

I started off with dmenu along with herbstluftwm, but now I use dmenu in very single window manager that I use.

You can even pass in arguments to programs using dmenu. Simply press spacebar after writing the name of the program you want to execute, then subsequently write the arguments that you want to pass in to the program.

Configuring and patching dwm might be difficult for beginners. I will try to make it as simple as I can by taking two examples:

Using your terminal, go to whichever folder you have cloned dwm in and type ls .

You may notice three configuration files in the directory. config.mk contains the build configuration. You won’t have to touch it in the best case scenario.

config.h and config.def.h are the files that you will need to edit when you are configuring dwm. I suggest making the configuration changes on a different branch:

Once you are on a different branch, open the Makefile and edit clean recipe to add the following line of code in it:

This will make sure that whenever you are configuring a patch, you won’t have to make changes in both config.h as well as config.def.h .

Now whenever you make a change in the config.def.h , simply run make clean install for re-building dwm from scratch. Then logout and log back in again for the changes to take effect. Dwm requires its source to be rebuilt every time there is a configuration change, which is unlike other window managers like herbstluftwm and i3, where you can simply reload the configuration at runtime. 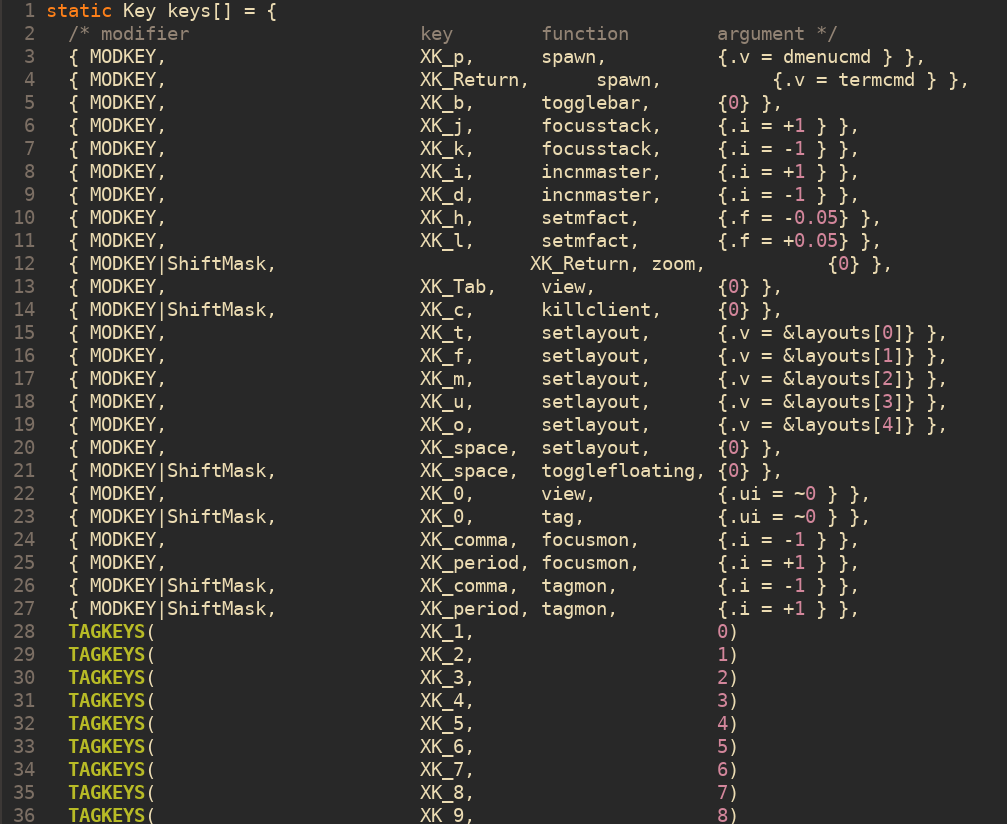 It means that for spawning a terminal, you would have to hit <Alt> + <Shift> + <Enter> . You can already see in the screenshot above, that I have removed ShiftMask from this line. So for opening up the terminal I simply do <Alt> + <Enter> .

Now by default dwm uses st (simple terminal) when someone hits the keybindings for opening the terminal up. That is why your terminal might not open up the first time you hit the default key binding for doing so (if st is not installed). However this can easily be changed to suit the terminal of your choice by simply editing the argument termcmd definition. Since I use terminator , I have changed it like this:

In this example, I will be installing the centeredmaster patch. Download its source code and place it in the dwm directory.

Patches in dwm are tagged commit diffs in the upstream repository of the version control system. Therefore, for apply patches, you have to use git:

Once you do that, it will make changes in the dwm source code. Simply commit after doing so. Once the patch is successfully applied, build dwm again by running make clean install , logout and log back in again to see the changes in effect.

To activate centeredmaster , hit <Alt> + u . This way patches and different layouts can be installed for dwm.

Dwm is an easy to use but hard to configure window manager, especially for beginners. It has a lot of useful patches which feel like they should’ve been shipped dwm source itself. The main drawback is the need to compile the source and log back in again after a change in configuration. Except for that, dwm is a really fun to use window manager. It is extremely fast, feature rich, and powerful.

Now some of the patches in dwm might not work out of the box. This is primarily due to the fact that you might have a version which is not yet supported by the patch. But the developer community is always doing changes on those patches. All in all, patching your own dwm configuration is a rewarding process.